My colleague Akkai has become the first transgender person to be conferred the Rajyotsava Award 2015, the second highest civilian honour presented by the Karnataka State Government. 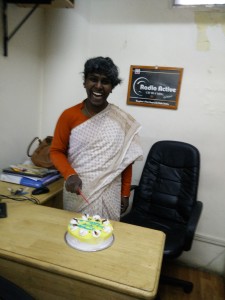 My first interaction of Akkai, was when she walked into Radio Active in 2009. Clad in a simple salwar, with a duppatta wrapped around her, she personified “grace”.  Her first statement to me “I was born with a penis, but I am woman and my mission is to work for equitable society where sexual minorities are recognized and respected”.

Something immediately clicked, as we both shared a common dream of “amplifying voices”, and following a workshop on community radio a Sangama office the Gender Talk program was launched in 2009. Gender Talk was a weekly show on Radio Active, where issues of community were addressed. It was not till 2010, that Akkai felt it was time that the community hosted their own show and Yari varu was born, with Priyanka hosting it. Akkai continued to be a part of the Programme Committee for the show, till she came on board Radio Active and Jain University in December 2013.

Her story is one of determination and it was not easy considering that her growing up years were marred with doubts and low self-esteem. From being taken to the doctors to temples and tantriks, she was treated as a child possessed; causing her to believe that she was weird. Life in school was not easy; she was taunted, ridiculed and abused, till she decided to quit and work, where life was no different. She continued being harassed for the way she was…

With nowhere to go, and no one to share her predicament, she sought her own company. Brooding at a bustop near Corporation Circle, Akkai spotted four transgenders and felt an immediate urge to speak to them.  Expecting a hostile reaction, as she approached them, she was surprised when they embraced her. She had an epiphany. That was when she came to terms with her identity. She felt like she belonged somewhere. Even though they advised her to study, she felt that she needed money to survive. At the age of 16 she became a sex worker making Cubbon Park her office space. The work was humiliating, and one of constant fear, but Akkai learnt to find solace in the company of her friends, knowing that she was one among them. On an average day of 10-15 customers, she would earn between Rs. 30 to Rs. 100/-

It was in 2004, that she met her mentor Manohar, the founder of Sangama and that was a turning point in her life. From being a sex-worker, she moved on to educate sexual minorities on basic rights,  motivating the community members on self-acceptance. Thus began her tryst with advocacy for her community’s rights and recognition.

2012, was an important year, as Akkai was invited by the President of India to the swearing-in of the Chief Justice Sri Altamas Kabir at the Rashtrapati Bhavan in New Delhi and she became the first person to go through a Sex Reassignment Surgery.

She has come a long way from being the “voice of her community”, to be accepted as a role model. .. She joined Jain University & Radio Active on December 1st 2013 to work on Strengthening Advocacy Activities for Gender & Sexual Minorities and Sex Workers’ under the three thematic areas of Communication and Media Generation, Capacities and Skill Development & Policy and Advocacy. The initial euphoria was short-lived as eleven days after she joined came the news that the Supreme Court upheld Section 377 criminalizing homosexual sex on December 11, 2013. Her initial reaction was that of disbelief and she went through a myriad of emotions from shock, to sadness, from anger to disappointment and finally fears! She feared for her community… But that was soon replaced by determination and she called people, which not just strengthened her resolve but also believed that her community must come together and unite in one voice…

Working at multiple levels, she soon

decided there was no point fighting a lone battle. While the community stands united, there was a need for convergence among the three different movements- children’s rights, women’s rights and sexual minority rights, and this led to the birth of “Ondede”.  An initiative that I am proud to be associated with, as it stands for all that we believe in a society where “community voice” matters.

Pinky Chandran, is the Director of Radio Active and the Founder Member of Ondede