This year’s Gandhi Jayanti was different, as residents across Bangalore  pledged for a Swachh and Sustainable Bengaluru. Various activities were planned across Bangalore, as part of the festivities.. The programme was conceptualised by the Solid Waste Management Round Table and Bangalore Eco Team in association with BBMP and KSPCB, for a year long committment to create awareness about waste management among citizens. The activities hosted included, emphasising on door-to-door waste collection, green ambassador pledge, children’s voices on branded litter, 2 Bin 1 Bag segregation, composting at home, mini talks and group selfie etc. 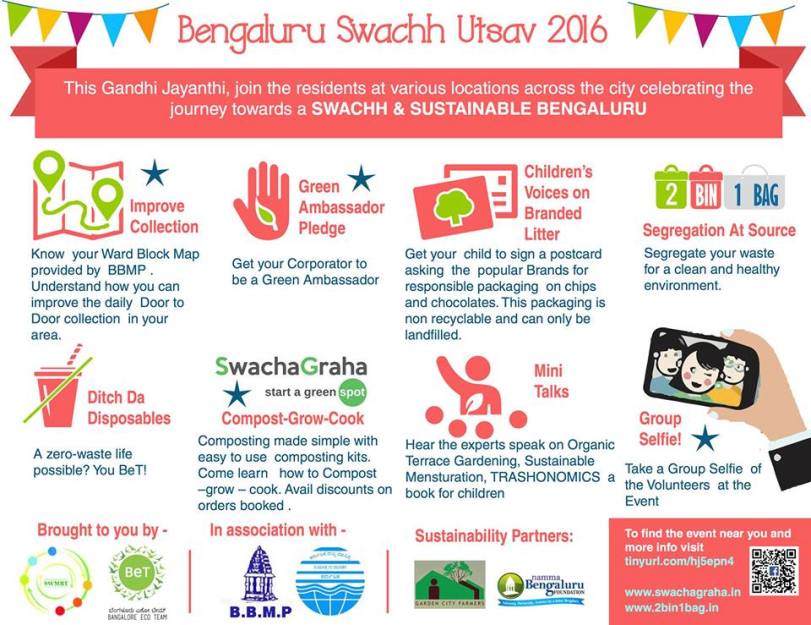 Take a listen to some of the interviews

“Today, as part of Swachh Utsav, we have taken a pledge of not using single use plastic, to ensure waste segregation, reduce the usage of paper, and plant more saplings.  We had over 150 standing crowd, and over 400 walkins for the event- Jyothi, Member, Bangalore Eco Team

“On 2nd October 2016, at the public function led by Dr. C N Ashwathnarayan, MLA a presentation on the cuuret initatives and a progress report was also released.In addition, the new initatives for October 2016-17 was unveiled.  Some of the key activities include