Reconnecting with my roots that I once dismissed has been the most meaningful experience of my life: Savita Uday, founder of #BuDaFolklore

RJ Lakshmi Karunakaran travels to the foothills of the Western Ghats to bring back glimpses and stories of tribal life in this area that is being revived by the BuDa Folklore Project. 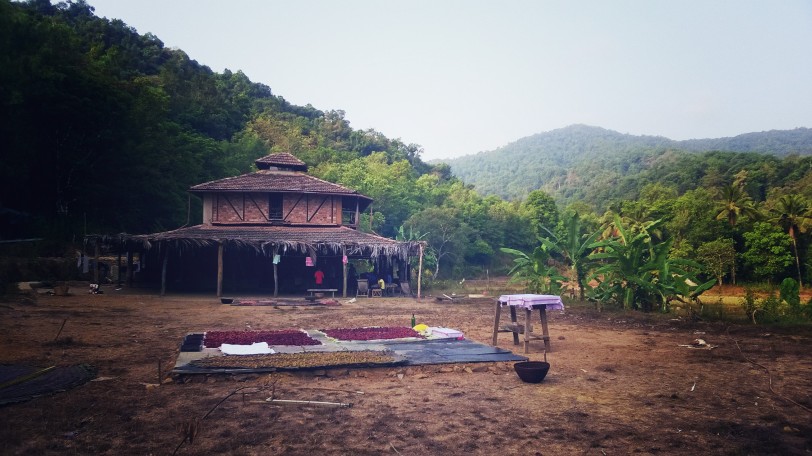 The BuDa home at Angadibail

Welcome to Angadibail. Its not an easy commute to get to this quaint little village in the foothills of the Western Ghats. This is a place that’s truly off the grid – off the google map, off electricity, off phone networks and off internet.

If you are traveling from Namma Bengaluru, like I did- its an overnight bus to get to Madanagere Cross, about 5 kms before Gokarna, from there catch one of the few buses to Chanagar village and then call Savita Uday, the founder of Buda Folklore to pick you up to reach Angadibail, a village about 70 kilometers north of Honnavar.

The tiredness and exhaustion from the trip disappeared soon after I reached the home I would spend the next few days in as a part of BuDa’s yearly Kokum Harvest Festival. A remote, quaint home, with tiled roof, a beautiful attic and airy spaces, filled with the smells of the freshly harvested Kokum and the aroma of the different delicacies that were being prepared on fire wood, in the non mechanized kitchen.

The next few days I spent living in a forest farm, sleeping in the fields in a machan, waking up to the mountains, climbing trees, harvesting kokum, cleaning the harvest with local tribal women who sing the most fascinating tribal riddle songs, attending to a just born calf, weaving baskets, running behind Beera, the farm dog whose afternoon ritual is to play with underwear left out to dry, eating each meal of pure organic farm grown food like it was my last and learning (yet again) that a life without internet and electricity is total bliss.

BuDa Folklore is an organization that is dedicated to the conservation, development and promotion of the cultural and natural environment of the Uttara Kannada region. BuDa, means ‘the base’ in Kannada. It runs a museum in Honnavar, and a learning center in Angadibail. Savita started it after she quit her teaching job in Bengaluru in 2006. BuDa is a part of her parent’s NGO Janapada Vishva Prathishtana. The initiatives of the NGO with adivasi tribes that live in the district—the Halakkis who live by the sea, the Siddis and the Kare Okkalu from the forest, and the Gondas and the Gamokkalu who live by the rivers—introducing their way of life to curious travelers like me.

Why did Savita leave a cozy life in Bengaluru to come and live in a place this remote?Why does she choose to work with the tribes? How has such an initiative made a difference to the lives of the tribal folks and to the city dwellers like me who come to get a glimpse of it during harvest festivals?

To get the answers to these questions I sat down with Savita, on a quite night under the stars for a chat. She spoke candidly about her fascinating journey from being a teacher to becoming a folklorist, and her efforts to revive the lost tribal traditional way of living.

Here is the interview:

The tribal women at the BuDa home are a repository of traditional tribal song on just about anything. They not only have a song for different occasions but also every other word. As we worked on processing the harvested Kokum, Kuchili Ajji or Padmavati Ajji would break into a song, impromptu based on what we were talking about. Along with that came fascinating stories of animals, birds and fruits.

This is an unique story about how Mango came into the villages narrated by Padmavati Ajji, a tribal women from the Halekki Vokkaliga Tribe. Savita translates the story for us.

Living at the BuDa home in Angadibail has taught me how removed we have become from the traditional way of life, how life without technology is so much more richer in experience and in small pleasures, and how living a life that connects you back with nature while building a life that values and respects it, is a life well lived.