In this special show to mark the Ganesh Chaturthi festivities, RJ Priyanka speaks with NS Ramakanth about the importance of eco-friendly celebrations. The show highlights interesting alternatives to the usual traditions in order to prevent environmental pollution during the festive days.

Ramakanth introduces us to ‘Sasya Ganapathi’ and stresses upon the usage of clay idols at pandals as well as homes. The negative impact of idols made with Plaster of Paris is also discussed.

Ramakanth details the poisonous effects that POP idols unleash when immersed in water bodies. The material slowly diffuses mercury and lead into the lake, instead of dissolving in it, leaving behind water that is now polluted and poisonous. He has some suggestions on the substitutes – clay idols and Sasya Ganapathi idols.

Clay Ganapathi idols completely disintegrate in the water and leave behind no harmful residue. “This is the most popular way of preventing water pollution during the festival,” he says. Yet another alternative that has been fast gaining ground is the ‘Sasya Ganapathi’. After being immersed in water, the residue from these idols can be transferred into a pot. “This residue holds seeds which can soon germinate into saplings. In this way, the idol sprouts back to life,” he says.

Ulsoor Lake in Bangalore receives the biggest Ganesha idols from all over the city owing to its depth. As a precaution against pollution, the lake has banned the immersion of POP idols in its waters. A separate section of the water has been demarcated at most other lakes to cut down the spread of contamination. BBMP sends out trucks of water to every locality, providing another alternative to lake immersion of idols. This not only reduces the burden of cleaning the lakes but also prevents traffic congestion. However, Ramakanth critiques the efforts of the BBMP and the Pollution Control Board as being less effective than necessary. “Community-level celebrations of the festival often involve loud music across the streets. These aren’t ever banned by the government since they are usually funded by the politicians themselves,” he laments. 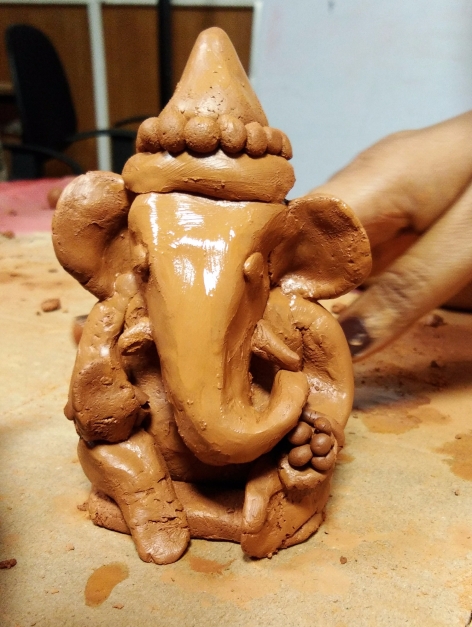 Ramakanth and his team of close to 1,000 volunteers work across eight zones of Bangalore to spread awareness about environment-friendly celebrations. The volunteers mainly reach out to school children to make them environment-sensitive from a young age. So far, they have reached out to 50,000 children. Interestingly, the volunteers also perform street plays to effectively convey information about the harmfulness of water pollution during the Ganesha festival. They also conduct workshops.

Cleaning the lakes once the festival is over requires over a month of rigorous work. Instead of harming our surroundings, it is much wiser to celebrate with ‘Sasya Ganapathi’ idols.

One positive has been that the number of clay idols being immersed in the city’s lakes has increased gradually over the years. “Pray, but do not pollute,” exhorts Ramakanth. RJ Priyanka reiterates this message and ends the show with the slogan – ‘Protect the Waterbodies and Save Bangalore’.