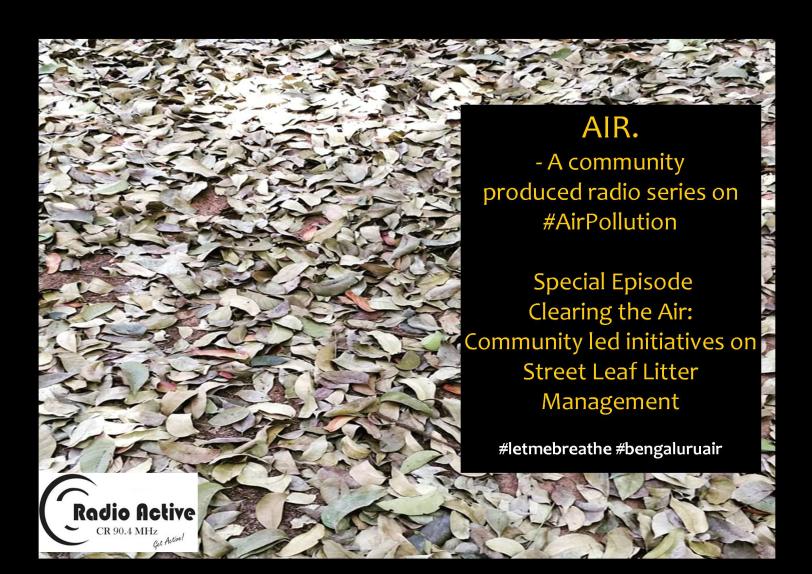 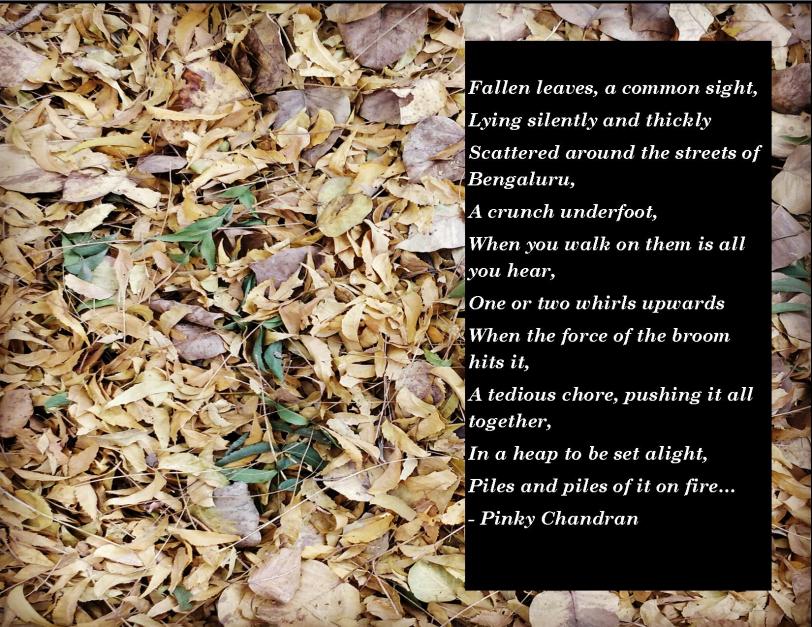 Burning leaves is a common sight in India.  Perhaps it is much easier a solution to reduce the mounds of dry leaves, rather than have the burden of collecting it and then transferring them to a garbage collection truck. The truck would, in turn, mix the leaves with other mixed waste so collected and make its way to the dump- yards away from the city. While the burning of the leaves was one problem, the burning of leaves combined with scraps of paper and plastic was adding fuel to the existing fire.Concerned residents in Bangalore saw a huge opportunity in managing leaf litter, instead of complaining to the municipality. Here are some of the community-led initiatives that have championed saving these resources.

Residents from Malleshwaram led by Dr. Meenakshi Bharath and Vani Murthy championed the cause of composting leaf litter from 2010.

Leaves are one of the biggest problems people face. They do not know what to do with leaves. Either they burn it which is extremely bad for the environment or they bag it and give it to the BBMP which goes to the landfills. So either way, it is not put to good use. Leaves are rich in carbon are part of the composting process. If you ask me, what I do in my composting? I collect leaves, the entire year. I absorb leaves.  Living on the third floor, I am not fortunate to have a line of trees shedding leaves. So I pick it up from my neighbourhood. The same way we thought people who have big compounds, need to put it back in their own compounds. So we looked setting up some kind of experiments for people to see it.

Dr. Meenakshi put up the first waste compost bed, not completely leaf waste, but also took in kitchen waste along with cow dung. Vellore Srinivas inspired us and we visited him to see his model. The other variation was with just leaves and cow dung, in my backyard. Ravi Kaushik, who was in my building, was part of this initiative. We then set out a call in the neighbourhood for the donation of leaves and cow-dung. We put in four or five just structures. The BBMP also started bringing in leaves.  This project convinced us of the need to pursue it further. After six to eight months, we saw our rich black gold. This experiment was instrumental reinstating that leaves are a valuable resource. – Vani Murthy,  Radio Interview: Special Series AIR.  @ Radio Active 90.4 MHz 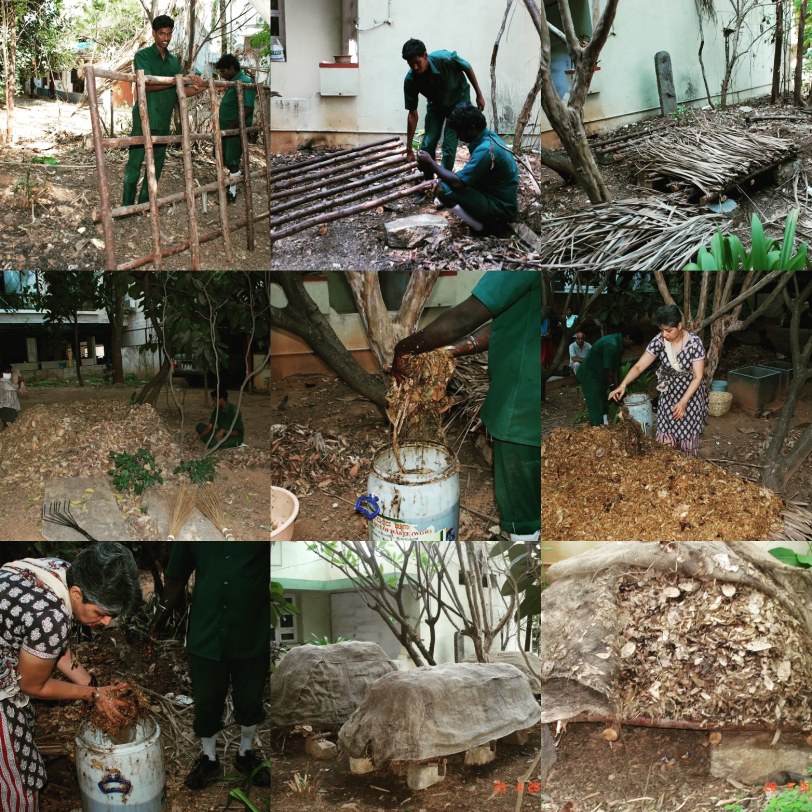 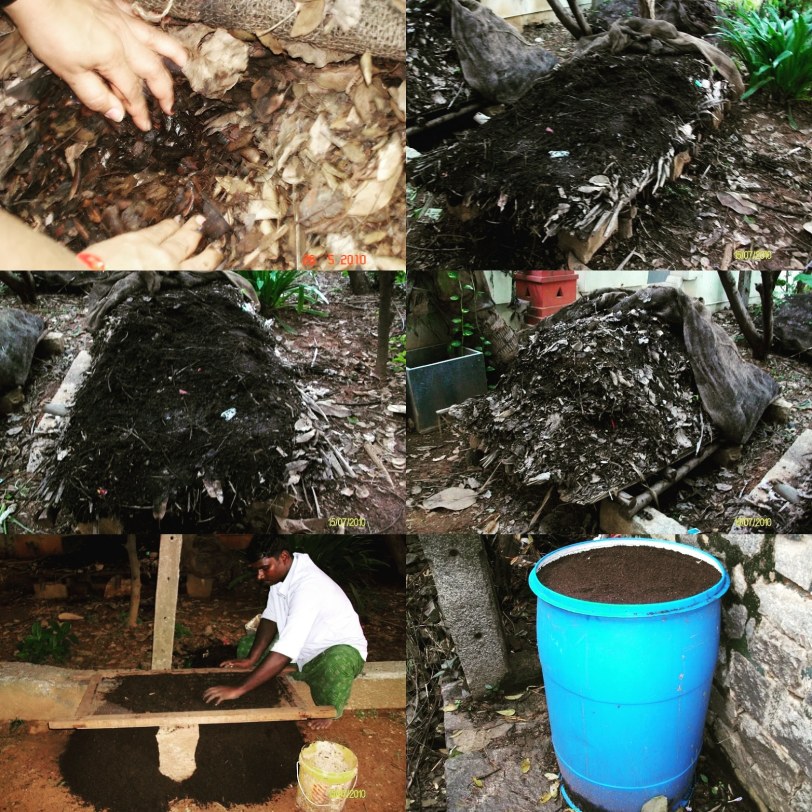 In 2014, volunteers started raking the street for dried leaves and Pongamia flowers. Armed with gloves and broom, they sweep the leaves and flowers into a heap, collect them for composting, every year during the season

The second experiment what we did was with the Pongamia flower, as cow dung is sometimes difficult to source. Pongamia flowers are rich in nitrogen and can be used as an alternative to cow dung. These are the beautiful purple flowers, and the roads are covered like carpet.   You need a combination of carbon and nitrogen, leaves and flowers. So Ravi suggested that we pick these flowers every day So we started going around 5.30am every morning during the season and sweep the Bangalore’s streets for these flowers. We created an enclosure with readily available materials like coconut; twigs and other garden waste. The first step is to create space in your garden. Build a structure using coconut fronds, rip out the dry leaves and use the thick part of the frond, Weave the coconut branches like a bed to hold leaves. Fill the bottom with coconut, twigs and other garden waste that help create an air tunnel and now add the leaves and flowers. In about eight months, you will have delicious leaf compost. Vani Murthy, Radio Interview: Special Series AIR.  @ Radio Active 90.4 MHz 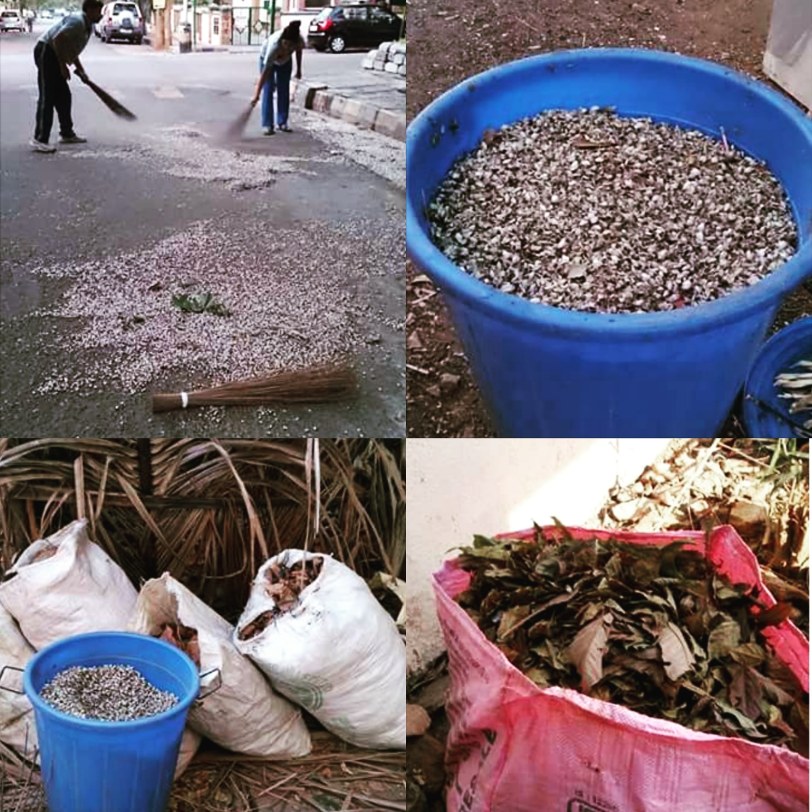 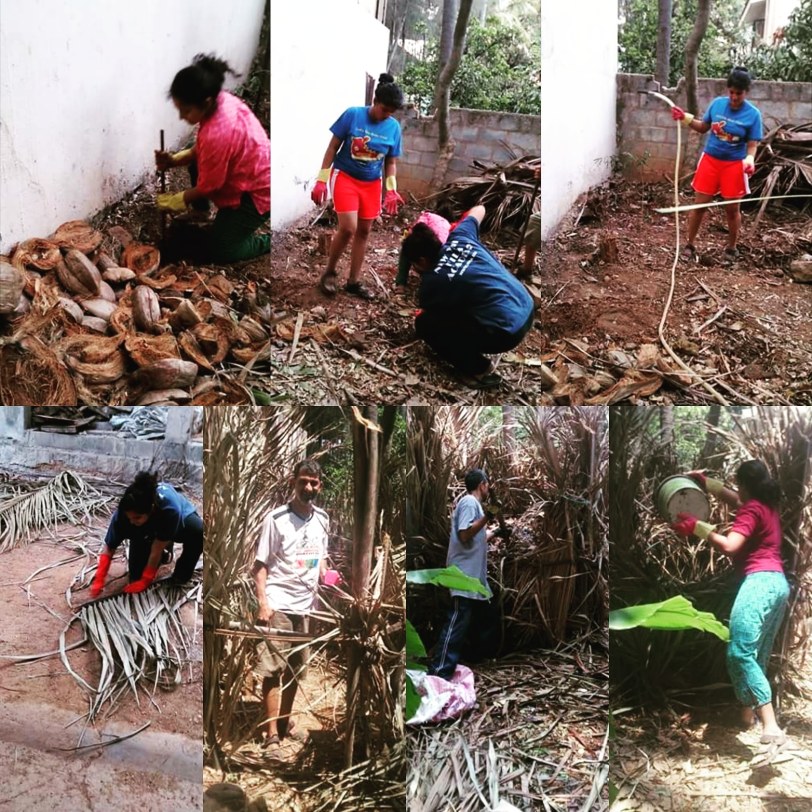 Concerned citizens around Bangalore started taking the initiative to tackle the problem of burning leaves, either by composting in their gardens or empty plots.

I started leaf composting around the year 2012-2013.My street is lined with Pongamia trees and there is heaving shedding of leaves during January and February. Given that my area is served by the BBMP, the pourakarmikas sweep the streets and used to dump leaves in an empty plot next to my house.  I largely remained unconcerned, till they set fire to the pile. I was aghast, one because of my breathing problem and two because the smoke started entering my house. I took to Facebook to complain but ended up learning from different neighbourhoods about leaf composting and soon enough was hooked. So now I ensure that leaves in empty plots are treated for composting and not burning. I have two leaf composters in my house, one in the ground floor and the other on the terrace. I collect leaves regularly and bag it. I have also asked my domestic help to collect leaves from the neighbourhood. – Anu Govind, Resident, Whitefield Radio Interview: Special Series AIR.  @ Radio Active 90.4 MHz 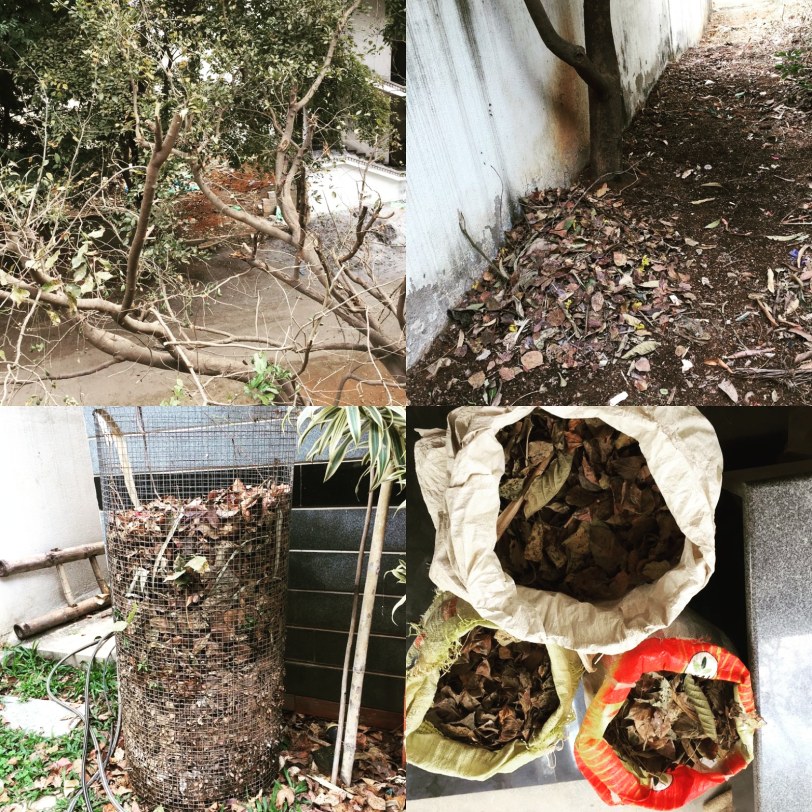 The Residents Welfare Association (RWA) of Koramanagala 3rd block, managed to go a step further by installing a leaf litter composting unit in 2013. A not-for-profit initiative Kora3B Compost is run in collaboration with the BBMP who collect leaf litter and provide space for composting.  The process is simple and easy. First, all material is put on a rotary sieve to remove other materials like plastic, twigs, and stones. The leaves are then piled with water and cow dung added for composting. The pile is monitored is monitored regularly to ensure moisture and aeration.  The compost is tested for quality by the University of Agricultural Sciences, Bangalore and revenue generated from compost sales are used for operations of the unit.

Anil Chinniah is a resident of Koramangala, takes us through the makings of Kora3B 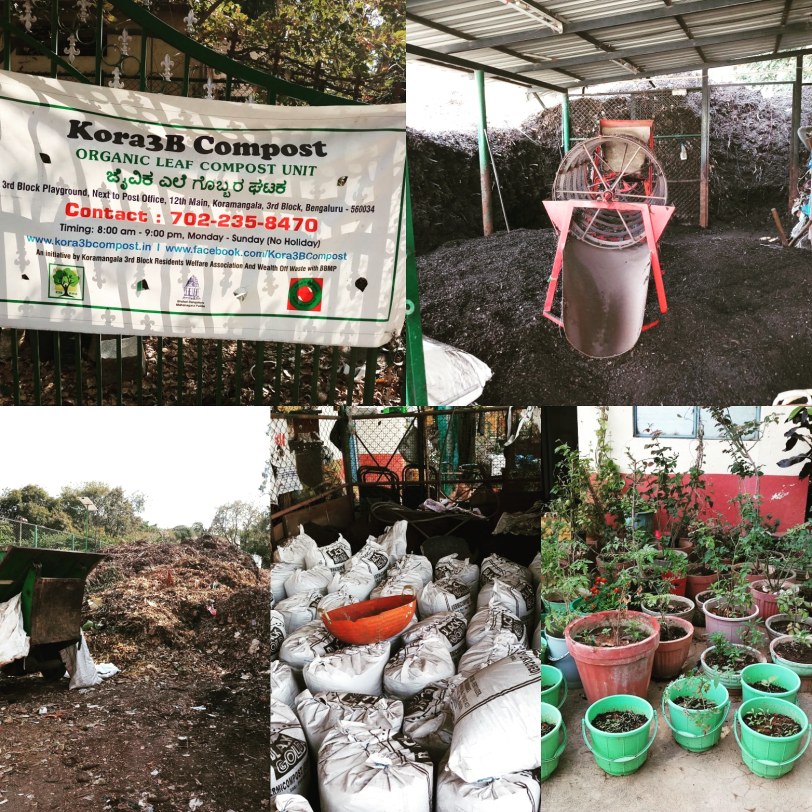 My biggest problem, when I used to go around was leaves being used as a dumping point. Collection of leaves would be made into a heap. And on the heap would fall more heaps of garbage and at the end of the day. And at the end of the day, a pourakarmika, or a watchman, or a driver or domestic help would put a fire on it. That created a lot of discomfort for the neighbours. Despite many awareness campaigns, the practice would not stop. So, I thought, we must have some micro-processing of these leaves. Around that time, I came across mesh cylinders like structures that could be used for leaf composting. And we found that this drastically stopped the burning.

We have 74 such structures around the block and we have assigned people around the street to add water and cow-dung into the composters and at the end of 40-50 days, we had wonderful compost, which is again used by the residents for their gardens.  Padmashree Balram, Radio Interview: Special Series AIR.  @ Radio Active 90.4 MHz 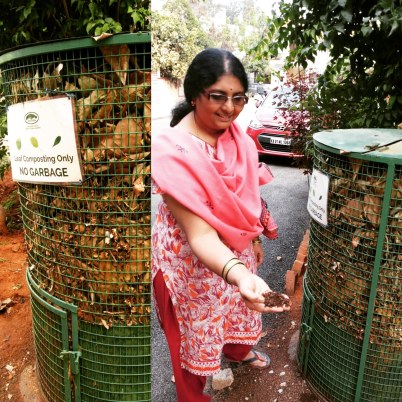 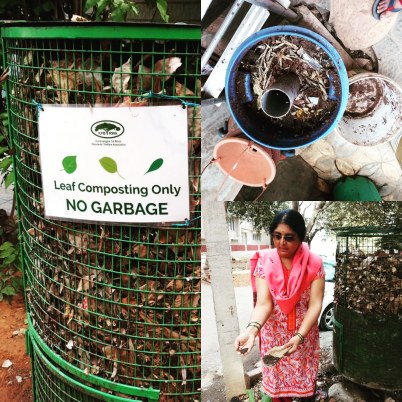 Leaf Composting in Parks and Temples

With neighbourhoods leading the way, citizen activists began campaigning for parks and temples to lead the way into saving these valuable resources. Vasuki Iyengar shares his story on how a local temple approached him for flower composting and then takes us through Cubbon Park and Lal Bagh- Bengaluru’s two historical lung spaces experiment with leaf composting.

The Shakthi Maha Ganapathi Temple, in Kalyan Nagar, approached me two years back saying we needed to do something about flowers waste. We then fabricated five leaf composters as the temple is located in a park. This was our first project. We now have 150 such composters. Leaf/flower composting is less challenging than kitchen waste. In Cubbon Park and LalBagh, waste warriors N S Ramakanth, Sandya Narayanan and Aparna Ponnappa, pushed for leaf composting. 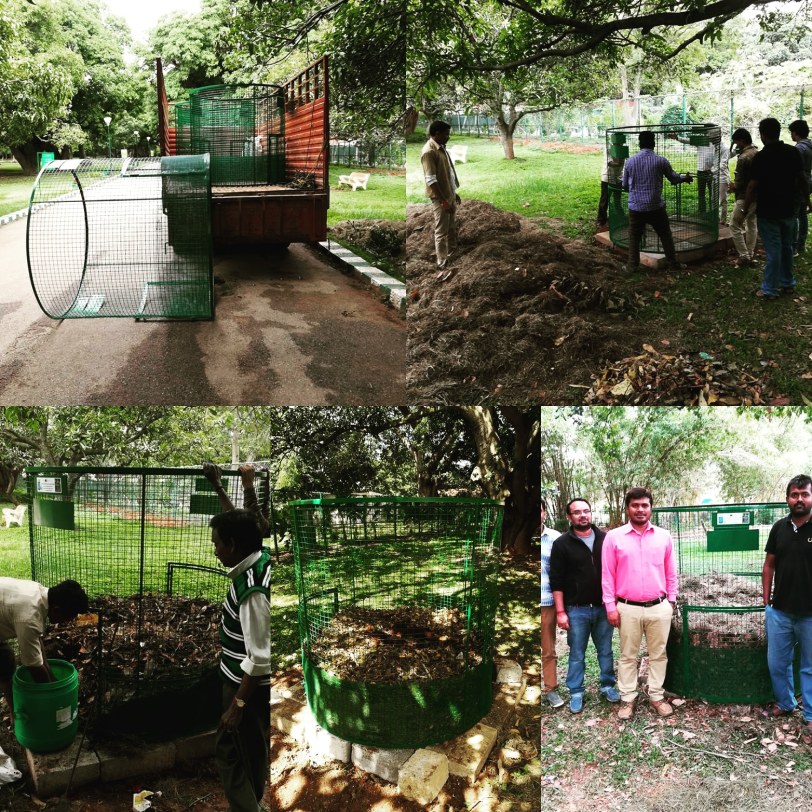 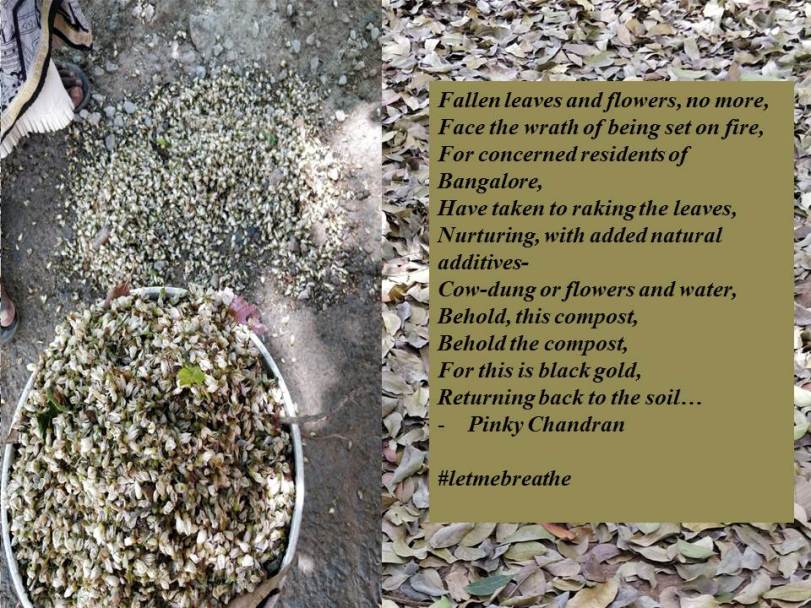