Finding Places to Learn : Sahar Qawasmi talks about growing up during political conflict

RJ Lakshmi Karunakaran speaks to Sahar Qawasmi, architect from Palestine about finding spaces to learn during times of conflict.

As an educator, seeing how our society has been imploding for years through communal tensions, riots, and separatist movements, I wonder what happens to our children during such political and social uncertainties. Though the scale and timeframe of conflicts in our society has not been as drastic as the Iran-Iraq war, the longest conventional war of the 20th century, or the three decade long and continuing conflict against occupation in Palestine, we know that in our conflicts it is our children who suffer the most – they become civilian victims, they are displaced, jailed, indoctrinated into becoming child soldiers and/or even forced into sexual or labour exploitations. Worldwide statistics from the last decade show that more than 5,00,000 children were recruited into state and non-state armed groups in over 85 countries. The numbers of active child soldiers currently fighting is 300,000, in government armed forces or armed opposition groups worldwide.

What happens to schools and to learning spaces in these conditions of political uncertainties. Do children just fall prey to propaganda? Or do they find spaces to learn despite these harsh circumstances? How did these events shape their educational journey and what are the lessons that left a lasting impact on them.

Sahar Qawasmi is a Palestinian architect. Raised between Kuwait,Iraq, and Jordan, she returned to her roots in Palestine and went on to study architecture at Birzeit University close to Ramallah/Palestine. After graduating, she joined the team at Riwaq–Center for Architectural Conservation in Ramallah. In this interview she reflects on her children, especially during the times of growing up in Palentines, and the times of the first Intefada.

“Every Palestinian child is a migrant many times over. I was born in Kuwait and I went to a very fancy school. There was a tremendous display of wealth – children came in big American cars, the school building was extravagant and the school playgrounds were massive. Soon we moved to Iraq, I went to a public school that was dilapidated, and children came to class barefoot in their pyjamas. That is all they had. As a child it left me very disturbed. In Kuwait, we studied in English and in Iraq I had to learn Arabic. Once the Iran-Iraq war broke out, we moved back to Kuwait and then to Amman. I joined a considerably modest school which was in a way a normalizing experience. By the time I was in fourth grade, we moved to Palestine.” 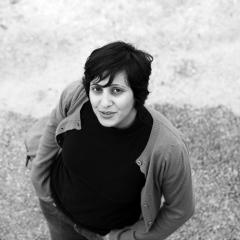 Ever since the UN resolution in 1947, the Palestinians have been fighting the Israeli occupation for their land and resources. I ask Sahar about the first Intefada in 1987, the first stone-throwing rebellion against Israeli repression. Stone throwers were largely children and teenagers. “When the first Intefada started there was a very strong community feel to the movement. I was about 10 years old. I remember seeing older girls walking down the street and shouting at Israeli jeeps and throwing maybe a stone and then the Israeli jeeps would rush into them and they would run in all directions.”

With the civil disobedience movement gaining steam, schools and educational institutes were shut down. The Palestinians started an underground education movement.

“Each neighbourhood started organizing their own schools. The community identified an expert on each subject in the neighbourhood and the children would go from house to house to learn. It was very well organized. We had time tables and lesson plans.”

Listen to the complete interview here: