“If you have a transgender person in your family, do not push them away, support them.” – Prapula Devi

Prapula Devi, who was originally named Ranjita, was born in Khilara, Mandaya district. This place is famed as the land of the arts and is the birthplace of K.V Shankare Gowda, the legendary education minister of Karnataka. 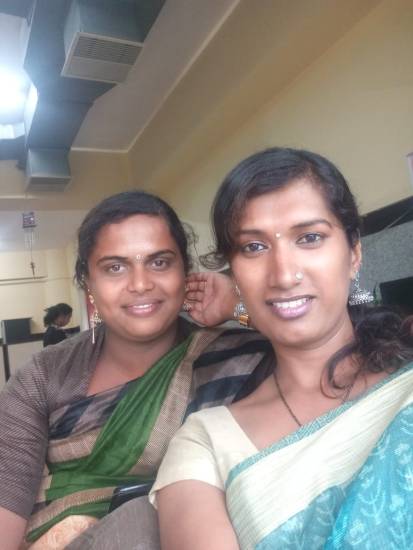 Prapula came to Bangalore seven years ago. “During my college days, people use to tease me by saying “Din ka Raj aur Raat ki Rani”,” she recalls. She couldn’t meet her parents for three years, a fact that established their lack of support towards her. During her SRS journey, she found confidence in her teachers and other older friends, and not from her well-educated parents who were engaged in government jobs. “Even in such an educated family, my real feelings were not welcome,” she says. “I used to stay at home most of the times, as in my village, I would be teased by people using terms like “Akkaiya”, “nine”, “aunty” and more, while walking on the streets. I used to react by stating that I’m not a transgender!” But after a while, she couldn’t tolerate any more of the teasing; she stopped working there and left the village. She shifted to Bangalore and with the guidance of her Guru, took shelter for some time at their residence. Gradually and voluntarily, she decided to live as part of her community. Till date, she follows her Guru’s words and respects them from the bottom of her heart.

Prapula is also honest about the hurt caused by familial rejection. “My family has always opposed me for changing my ‘behavior’. They forced me to learn car-driving and also made me work at different places, but I couldn’t hide my feelings anymore. I reassigned my gender and never informed my family. On the 13th day after my surgery, my grandmother passed away. That is when I went back and managed to present myself as a boy in front of my whole family.”

Prapula started two Stree Shakthi Sanghas in her village by the names of ‘Janmabhumi Mahila Sangha’ and ‘Mathrubhumi Mahila Sangha’ to bring about the ideas of gender equality. She has contributed to the work by representing her committee and community in many awareness programmes, notably in the awareness program conducted by the Channapattana Police Station in the year 2016.

Prapula had always wanted to build her own home in her village as she did not want to depend on others during her older years. She had applied for shelter under a government scheme benefiting her community. But, luckily, her family decided to support her; they finally acknowledged her progress and efforts to succeed in life. “This made me more proud and confident about my decisions. My mother supported me and motivated me in most of my activities.” Living in cities is easier for members of the transgender community, she says, as the people around are usually educated. “But for the communities in rural areas, it is still tough and they need to fight a lot for grants. I questioned some government officials the other day; we have grants for ration and other facilities, but where is the place for us to store them all? Where is the shelter for us that was promised?”

Prapula believes that transgender persons will not need to beg or do sex work if they are provided with the promised grants and basic necessities to live. “Don’t neglect our community. We are all one and if you find anyone belonging to our community in your surrounding environment or in your family, please do not push them aside. Instead, support and encourage them. They too have feelings.”